Compassion: It's Where It's At

I would just like to say thanks to the many of you who offered such kind words in response to my loss of mojo. While things have not changed much in terms of life circumstances, I have a deep and overwhelming love for this community.

Compassion is what gets us through. This I believe.

I once heard an anthropologist on a  radio lecture recounting this very thought as to how it has been possible for humans to survive droughts, fires, floods, wars and other disasters throughout history. While some of the details might have escaped me, the essence of the story has stuck with me ever since.

The son of British citizens, this anthropologist grew up in Kenya. He was familiar and fascinated with the country's rugged terrain, the vast spanse of uneven land that seemed to never end. An adventurer, he lost both of his legs in an accident, I believe it was a plane crash.

As an adult, he was in London on a day where the rain seemed to come down in buckets.  Walking along a busy highway, he lost his footing, and one of his two prosthetic legs flew across the road. He sat there soaked for ages, while cars whizzed by. He was stranded.

Out of nowhere, a drunken man approached him. Confused, he asked him what he was doing sitting there in the rain. The anthropologist replied that his leg was on the other side of the highway and therefore out of his reach. There were some comedic exchanges between the two until the drunken man crossed the wet road to retrieve the prosthetic piece and then continued on his journey.

Eventually, the anthropologist hailed a cab and made it back to tell his story.The two never met again, but what the anthropologist gained from his experience was this: That we humans, who originated from the African continent, would never have survived an ankle sprain on that uneven, rugged Kenyan terrain without the help of others. This compassion for our fellow human beings continues to enable us to withstand a rainy day spill on a modern London highway or even a loss of writerly mojo.

We need each other. Isn't that a beautiful thing?


P.S. Here is a picture of two of my favorite friends that would never survive without the other. 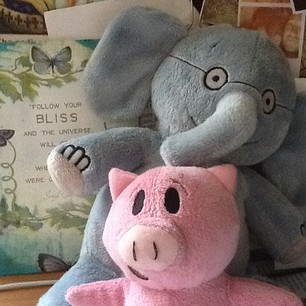 Posted by Elizabeth Stevens Omlor at 10:27 AM