Happy Banana Peel Thursday! Wait a minute...it's still Wednesday! But I am having issues with Blogger. So Thursday it is. (It's Thursday somewhere, right?) If you missed Wednesday's post, it's down there, past this one.  It's me blabbing about Povember. And if you are asking, "What the heck is Povember?", well, you just need to scroll down to check it out!

Today's post is from the archives, from way back when, in... January.
But first, a WINNER! The winner of Janee Trasler's masterpiece, Caveman: A B.C. Story, is...

You go Romelle! (Which really means, you go and send me your address right away so I can forward it to Janee! Yay!)

And now, let us revisit the post where the brain behind PiBoIdMo shared some of her most humbling experiences while writing for children!

Ladies and gents of  BaPeTh (AKA Banana Peel Thursdays)...may I present to you, the slips of PiBoIdMo's own Tara Lazar! 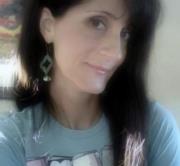 Some of you know that my debut picture book, THE MONSTORE, will be out with the Aladdin imprint of Simon & Schuster in 2013. Well, about six months before I signed the deal, I brought the manuscript to a conference to have a picture book consultant give me a critique. She read the story and then slowly, silently pushed it back across the table. Uh-oh. She called it "a practice manuscript" and recommended that I put it aside to work on something else--it was unsellable as-is. While I was extremely disappointed, after talking to this consultant for the next half-hour, I realized she was not the humorous-quirky type of picture book editor. She liked sweet and sentimental. Our styles didn't connect. I ignored her assessment and it's a good thing I did. So I call this slipping on a peel but landing on a bean bag chair. Remember that this industry is very subjective. Believe in your work.

I once began talking to an editor by telling him the name of his favorite book (I had researched him online). No hello, no pleasantries, just BOOK TITLE right in his face. Talk about stalkerish! No wonder he didn't talk to me for the rest of the conference.

I also made a total fool of myself while talking to an agent at another conference. I asked her a question and she leaned in, interested to engage in conversation, but her answer was terse. I had no follow-up question! My mind blanked. We stared at each other for an awkward moment. End of conversation.


I was convinced that the first thing I ever wrote would be published by the first editor who read it. I couldn't believe it when rejections piled up (and then toppled over). But I sent out a 1200-word manuscript about a homeless man with no child protagonist. DUH. Submitting too early happens to everyone. I just didn't think it would happen to ME. Wrong-o again.

I also submitted a middle grade novel to a first page session---and the attending agent requested the manuscript! I was so excited! But at the time, the manuscript wasn't done. It wasn't even near done. In fact, I was just two chapters into it. I missed out on a great opportunity by submitting something unfinished. At the time, I didn't know an agent won't work with you until something is completed, polished and ready-to-sell. Now I keep early work to myself.

And one of my biggest banana peels? Keeping my agent waiting for an answer. Ammi-Joan Paquette offered me representation in a phone call and I was excited, but I still had submissions out with four other agents. I knew to inform those agents, but I didn't know to give them a deadline to respond. So poor Joan is waiting for me, and poor me is waiting to hear from the other agents. Joan even sent me a message saying that she wanted me to be as enthusiastic about working with her as she was about working with me--and I was!!!!--but I didn't realize she was biting her nails waiting on me. ME?! You really want ME?! So I think I almost lost Joan due to my ignorance of how to deal with these things. And that would have been a tremendous FAIL because she is the BEST AGENT IN THE WORLD (for me).

I am sure there will be more banana peels. After all, my first book isn't even out yet! I haven't ventured into the world of book signings, school visits, appearances and the like. There is always some new mistake to make. But banana peels are great because you always learn from them. And if you're lucky, slipping on one means that someone nearby baked banana bread and you can nom on a slice.

Keeping early work to myself? Shnikies! I wish I had that advice a few months ago! WOOPS!


Thank you so much Tara for taking the time participate in this week's BPT.  I am so eternally grateful to have had you as a guest. You are wonderful. I know I am much wiser having read this as I am sure many other readers are. =)  I wish you the best of luck in any future banana peels you may encounter.