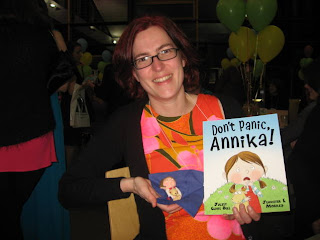 Juliet Clare Bell with an Annika made of icing, stolen from an incredible cake made for the SCBWI British Isles’ 2011 Conference Mass Book Launch
You need a very tough skin in this industry. Mine’s much tougher than banana skin now but it wasn’t always. Here are two ways to wear a tough skin rather than slip on one…
1: Learn not to think of your stories as your babies.
I spent months working really hard on my first rhyming story, Scatterbrained Kate and the Party. The story was quite simple, the rhyme quite complex, but I’d worked on the meter and scansion and had come up with something that I felt was energetic and fun. And hey –I’d shown it to family who really liked it. So it must be good. I was excited. Really excited. And proud of my little baby… And then I used SCBWI’s old manuscript exchange list to show it to a few SCBWI writers who were up for swapping picture book manuscripts.
An older woman I’d never met with a very authoritative email voice told me simply that ‘this will never get published because…’ and listed the reasons. I hadn’t grown my thick skin yet and this was my baby! I was indignant (as well as upset). Surely that was only her opinion? I was so affronted by her manner that I completely dismissed everything she said and within days, I’d deleted her email as it made me feel sick every time I looked at it (and I couldn’t stop looking at it).
Of course, this woman was absolutely right. It was never going to sell –and I actually think now she was trying to do me a favour. I overlooked what she’d said before ‘THIS WILL NEVER GET PUBLISHED! I’M MUCH BETTER THAN YOU, YOU’RE AN AMATEUR’ (as I’d read it), which, if I remember right (you can’t reread a crit you’ve deleted) actually said she thought I was good at rhyming and good at other things. She wasn’t saying it was bad. She was saying it was unpublishable –which is different, and I think she was trying to save me time by encouraging me to start something new which might be more publishable.
Her manner was poor, but if I’d had a thick enough skin and hadn’t felt so personally attached to the story, I’d have [1] kept the critique, [2] discarded the superior tone in which she’d written it, [3] read it really, really carefully and actually benefited from the content (in spite of the tone).
Fortunately, I’m very stubborn and I picked myself up relatively quickly and set up a critique group which is still going strong six years later (where we’re frank with our feedback, but still completely respectful). By regularly exposing my stories to other people, I’ve learned to be less emotionally involved and listen –properly- to feedback that is about a particular story and not about me.
If you’re really serious about a manuscript (and I was about Scatterbrained Kate), it’s hard to believe that it might not be the one to launch your career. That doesn’t mean it won’t be playing a huge part in your getting there eventually, or that you don’t need to put as much work into it. It’s like an apprenticeship. And what you learn from writing it, editing it and then listening to feedback may well help your next book become something extraordinary –and publishable. If you want something published, professionals will have to read it and they will not give it more than a quick skim through unless it jumps out at them. Why not let go of it earlier in the process and get other writers whom you trust to enable you to present something that really will jump out at that editor or agent? If you think of your manuscript as your baby (loved, beautiful, doted on, and woe betide anyone who says anything against him or her), chances are he or she will never grow up into a book.
Of course, it may be different for you –your early work might be fantastic and publishable. But don’t give up it it’s not. 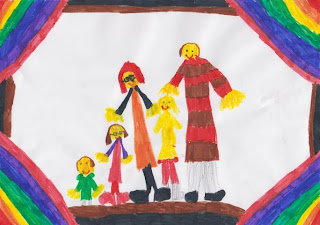 This is me with my real babies, as drawn by Esther, baby number two, second from left. Whilst I know these guys are perfect and I don’t ever need feedback on them, I also know that every story I write will be improved by other writers’ feedback.
No. 2: Never send something to editors or agents you kind-of-know-isn’t-right for them just because you can do it quickly (via email), or so they don’t forget you after you’ve had some contact with them.
When I’d been writing picture book manuscripts for about five years and was getting lots of near misses from editors, I decided to contact a specific agent whose responses in interviews about picture books really fit with how I felt about them. She usually took on two or three writers out of the 3000 or so people who contacted her in a year but I thought I’d start with her anyway (and then make a list of other agents to approach whilst I was waiting for her rejection).
After six weeks, there was an email from her in my inbox. I knew it must be a rejection because it would be crazy to be anything else. In fact, it wasn’t. She said she really liked two of the five manuscripts I’d sent her and would I write her some more as she’d need at least three to take me on? And this is the bit where I didn’t quite listen well enough and jumped the gun with something that wasn’t right…
She had told me specifically what she liked about the two manuscripts and she wanted more in that vein (warm stories about family and everyday life). She’s said why she didn’t want the other three (too hard a sell). She said so. So I knew exactly what to send. Much quicker than I normally think up and write a story, I wrote one. And soon after, another. But whilst I was waiting for feedback on the second (I’d already send out and got feedback from my critique groups on the first), I got impatient. I had a great idea: whilst she was waiting for the kind of stories she’d specifically asked for, shouldn’t I send her something else I’d been working on that was completely different and educational in feel, even though a fellow writer I’d spoken to months before whom she represented had also said that that project didn’t sound like the agent’s style? (I’d tell her of course that I’d send the others soon…) I thought it would keep me in the forefront of her mind.
Why? What a hugely wasted opportunity –I was only another couple of weeks from sending her two really well revised warm stories about family and everyday life. I clearly hadn’t listened and had wasted her time with something irrelevant. The rejection wasn’t even from her. It was from her assistant –and it even said they were really sorry as they’d really liked the other manuscripts. This agent was an extremely busy woman, dealing with 60-odd hopefuls in a week on top of her job of representing her current clients. She had been really interested and had asked me for a very specific thing -and I’d blown my chances.
You don’t get loads of chances –don’t blow them by sending something too soon, or something irrelevant. Agents and editors are phenomenally busy and their main priority is not finding me –or you. Only ever send the best –and most relevant manuscripts you have.
The story had a happy ending though –I apologised profusely over email; she changed her mind and asked me to send them to her when they were ready. And although she finally decided against taking me on, she recommended another agent, Celia Catchpole –who was already top of my list of who to approach next- as she thought she’d like my stories. She did, and she’s the absolute right agent for me. The story I wrote in response to the first agent’s initial positive reply (I came up with the first line of it that evening) became my first picture book, Don’t Panic, Annika! You can see it here, read by one of my real babies, my (un-panicking) daughter, Annika.
http://www.youtube.com/watch?v=c6uj3Vc7jGM
Juliet Clare Bell is the author of Don’t Panic, Annika! (2011, illustrated by Jennifer E. Morris; Piccadilly Press, UK; Koala Books, Australia; also in Dutch and soon to be in Chinese and Slovenian). Pirate Picnic, an early reader, is out in May, 2012 (Franklin Watts) and The Kite Princess (illustrated by Laura-Kate Chapman; Barefoot Books, UK and US), accompanied by a recording of the story read by Oscar-nominated Imelda Staunton, will be out in autumn, 2012. She’s an active member and volunteer of SCBWI (British Isles), an organisation she’d recommend highly to anyone who is serious about telling the very best stories they can in the very best way they can, and getting them picked up by editors or agents. Her website is www.julietclarebell.com and she’s just joined Picture Book Den, a blog by ten UK picture book authors, with additional guest spots (Julia Donaldson is doing a guest blog in March 2012): http://picturebookden.blogspot.com/ .
*********************************************************

I don't know about you, but I feel about ten times smarter having read Clare's slips. (Juliet Clare becomes Clare after you share such intimate knowledge such as one's banana peel moments!)

Thank you SO much Clare for sharing your experiences. Also, for sharing your lovely daughter's reading of your work! What a sweet girl. (I know you don't need feedback, since she is perfect, but just thought I would let you know!) Good luck to you with your fall release of The Kite Princess! Can't WAIT to read it!
Posted by Elizabeth Stevens Omlor at 12:00 AM