I am just plain giddy here in Bananaland this month. Not only are my local Target and public library getting face lifts (my homes away from home), but I have won a critique with the Picture Book Whisperer, Mira Reisberg! I don't think I have won anything in my entire life, except when I play my kids in a mean game of Hungry Hippos. (No. I don't feel very good about myself. But it's just too easy!)

Oh and here, at this very site, this very month, we have Liz Garton Scanlon, Amy Novesky, and Jill Esbaum, not to mention today's guest, the wonderful Audrey Vernick. There is some award winning talent here folks and I can hardily contain myself. Actually, I haven't contained myself at all. Oh, how my family suffers, as well as the children's librarians, oh and the baristas down the way and that one lady at the gas station.

In all seriousness, what has truly left the largest impression on me that I just have to share has been the generosity and humility of each author listed above. They set the bar high folks in talent and Coolness. (Please note it's Coolness, with a capital c). 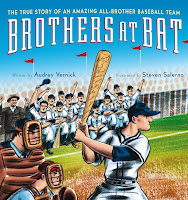 2) A ball signed by three of the Acerra brothers (This offer made my heart drop. Literally, it was on the floor. Splat.)

To enter to win the book, leave a comment below. If you wish to win the ball, please indicate so in your comment and explain what baseball has meant to you and your family. Two winners will be drawn using Random.org.
Ladies and gentleman (Hi Eric!), let us welcome Audrey Vernick.
********************************************************
I enjoy creating and participating in events that tie in with the themes of my books. I’ve spoken at the Baseball Hall of Fame, celebrated my middle-grade novel, WATER BALLOON, with my kids and their friends in a faux water balloon fight right before its launch party, read IS YOUR BUFFALO READY FOR KINDERGARTEN? to students in the very classroom in which I was a kindergartner.
So I was thrilled when I had the opportunity to celebrate Effa Manley Day with the Newark Bears. Effa Manley was the subject of my nonfiction picture book, SHE LOVED BASEBALL, the co-owner and business manager of the Newark Eagles, a Negro League team.
I met with the Bears’ new management. We agreed on a date. My publisher graciously donated books to be given to the first 50 kids through the gate. The book trailer for SHE LOVED BASEBALL would be shown on the big jumbo-tron . The team’s manager, former Yankee Tim Raines, would read my book to kids before the game. We even arranged for Effa Manley’s niece to throw out the first pitch.
Now, you sort of have the punchline already in your brain, since you know that banana peel moments aren’t shining examples of everything going according to plan.
It began early in the week when we learned that Effa’s niece couldn’t get to the stadium. I decided my daughter would throw out the first pitch instead.
I invited family and friends, far and wide, and was touched by how many made the trip. But I had a sense, as the gates opened, that things weren’t going to be running smoothly.
There wasn’t a copy of SHE LOVED BASEBALL anywhere in sight. The ticket-takers knew nothing about it. It took a long time to track down my (busy, overworked, stressed) contact at the Bears and have her arrange for the books to be at the two gates.
Tim Raines, it turned out, was letting a player go (aka firing him) at the time he was supposed to read my book. So they sent down a utility infielder of questionable literacy. He was game and an awesome sport, but it was uncomfortable. SHE LOVED BASEBALL had never before seemed like SUCH a long book. But we all looked forward to seeing the trailer on the jumbo-tron once the reading finished. At least there’d be that.
Except he took so long to read that they showed the trailer while we were still in the green room, listening to the longest-ever reading of a picture book. We were told they’d play it again at the end of the game. After the fireworks.
Then it was time for my daughter and me to go on the field. The scoreboard welcomed us with a big misspelling of our names—Anna and Audrey Bernick.
Anna threw a crazy arching shot that miraculously landed right in the strike zone. My sisters were still laughing about Bernick, but everyone else was cheering.
A lot went wrong, but I spent the night in the company of wonderful relatives and friends, doing a better job of not stressing out than I’d have been able to do a few years earlier.
At the end of the night, many had left, but we stayed to watch the fireworks. And to watch the trailer on the jumbo-tron. It was awesome against the black sky backdrop.. It really was.
When I talk about Effa Manley Day, I usually leave out the way her niece dropped out, the books nowhere in sight when we arrived, the sweet infielder who most decidedly was NOT Tim Raines who gamely made his way through my book in about 27 minutes, the way we missed the initial viewing of the trailer on the jumbo-tron. Oh, and in a classic example of how maybe they really didn’t get it over there at the Newark Bears’ ballpark on this particular night, they chose to have the mascot named Effa sit out that night, while her counterpart, Rupert, carried on with mascot antics.
It was a mess. A mess I invited loved ones to witness. But we still had fun.
*****************************************************
Audrey Bernick Vernick, thank you SO very much for being so incredibly kind and participating in this series.  I wish you nothing but the best. =)

Ms.Vernick has just a few books under her belt.

Email ThisBlogThis!Share to TwitterShare to FacebookShare to Pinterest
Labels: Audrey Vernick, Borthers at Bat, children's authors, children's books, embarrassing moments, So You Want to Be A Rock Star, Water Balloon