I cannot begin this post without mentioning how big of  fans my family and I are of this week's featured author's book, All the World. It is one of my favorite bedtime reads. Sometimes, I will even read it to my children....

With both words and illustrations so peaceful and warm, we point to the lone surfer at the edge of the pier and say how that's daddy, despite the fact he doesn't really surf. It never fails that during each read, my daughter notices that someone forgot their beach ball and my son shouts with excitement, "Tuh! Tuh!" when he spots the old truck, which in two year old means, Tuh-Mater. We are a Cars family. =)

I won't even give you the cheesy rhyming lines I used to try and entice the author to write this post for the series, but just know, they were intended to have the same rhythm of All of the World. (Did I mention I am a delusional rhymer...someone who thinks they rhyme but they really don't?)  Banana peel slip? Yup. More than slightly embarrassing in retrospect? Definitely.

Lucky for us she was forgiving and kind. =)

As I got started in this field, I took one banana peel slide after another, in part because I knew nothing about picture books – except that I loved them.
So. I wrote long, rambly texts with irregular rhyme.
I simultaneously submitted to editors who’d asked for exclusives.
I whined impatiently about how long everything took.
(Everything DOES take a long time, and I still whine some, but now I know it as part of the package rather than taking it as a personal affront.)
I revised endlessly – without contracts.
I signed contracts without understanding them.
I did a lot of things for free.
(Until my husband reminded me about the mortgage and all.)
I shared cover images before I was supposed to, got in touch with illustrators before I was supposed to, and lord knows I pressed send before I was supposed to. Many, many times.
And then there was the infamous school visit.
I forgot to get specific directions so I got lost on the way there.
Pre-smart phone. 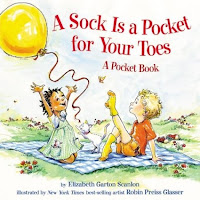 I forgot to say I could do 3 or 4 presentations in the course of a day.
So I did six.
I forgot to confirm that there would be a projector waiting for me.
So there wasn’t.
I forgot to ensure that there’d be at least 10 minutes to breathe and swallow in between presentations.
I was positively Victorian in my swooning by the final bell.
Oh.
And.
I forgot to say that I speak very, very, very little Spanish.
Unlike everyone else at the school.
I ended up singing the Spanish songs I learned in elementary school, and excitedly calling out things like “palabras” or “escritas” whenever an old scrap of knowledge popped into my desperate brain. But mostly? I smiled. And I said, “Thank you, thank you. Gracias, gracias.”
And at the end of the day, as I stood there with raw tonsils and bleeding eyeballs, that’s what the students and librarian said, too. “Thank you, thank you. Gracias, gracias.”
We’d survived. 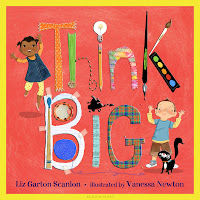 Liz Garton Scanlon is the author of the highly-acclaimed, Caldecott-honored picture book All the World, illustrated by Marla Frazee, as well as Noodle & Lou, illustrated by Arthur Howard, and A Sock is a Pocket for Your Toes, illustrated by Robin Preiss Glasser. Her next book will be out later this spring: Think Big is illustrated by Vanessa Newton and it celebrates the many varied forms of art. Future books include Happy Birthday, Bunny, illustrated by Stephanie Graegin, due next year, and The Good-Pie Party and Thank You, Garden, both due in 2014. Ms. Scanlon is assistant professor of creative writing at Austin Community College and is a frequent & popular presenter at schools, libraries and conferences. To learn more, visit her web  site at www.LizGartonScanlon.com

After reading this, my former teacher self began to sweat. I think most teachers would agree that the only thing that is guaranteed as soon as you step onto a school's campus is Murphy's Law!

Thank you so much Liz for your contribution to the series! Gracias. Gracias. =)

Also, thank you readers for stopping by. Make sure to check out Liz's blog this month where she is writing a haiku-a-day all April in honor of National Poetry Month!